'Having fished in the BCAC the weekend before, I had not planned on fishing the following weekend. That was until Wednesday evening when I was sat at home watching TV with the wife and she turned to me and said “Are you going fishing Saturday after work or Sunday morning?” I quickly replied saying “Saturday after work”. The was the golden ticket to do a few nights of unexpected angling if ever there was one. Out of the blue, it was game on!'

Kev did not expect to get the rods out the week after BCAC!

I rang Bart and he had a similar situation and managed to switch a few things around and all of a sudden we both found ourselves pulling in the gate of the wonderful Farriers syndicate at 7pm on Saturday evening. The lake was busy as you would expect on a weekend but there were a couple of empty pegs we both fancied. Unfortunately they were total opposite sides of the lake so I opted for the short walk and he took the long walk. There were a few fish about in the shallow water at close range in front of my swim and I had a go off the top for an hour or so before I decided they just were not going to play ball. The darkness was rapidly descending so I had a few casts with a marker lead and a spot I had fished the precious year was lovely and clear. I soon had a couple of trusty Ronnies with size 6 Curve Shanks deployed onto the spot with Double Plastic Corn hookbaits. I put about 15 Spomb’s of bait out over the top and my traps were set. I gave Bart a call to see how things were looking over the other side and basically I moaned for about half an hour as I really wasn’t feeling it. To make matters worse I had a tenchy drop back just into darkness. I picked up the rod and wound down fully expecting to connect with an erratic tench but instead I was greeted with a healthy resistance. The fish slowly and steadily stripped line from a tight clutch and I knew I was connected with a decent fish. It plodded around taking line with ease as and when it wanted to. My 18lb Syncro XT held strong and did it’s job. It was pitch black by the time I got the fish up on the top ready to be netted and I made no mistakes. I could see it was a lump and the scales confirmed that as they whizzed round and settled on 41Lb 6oz. What a way to start the trip. I had only fished work less than three hours ago and I had a 40lber in the net. 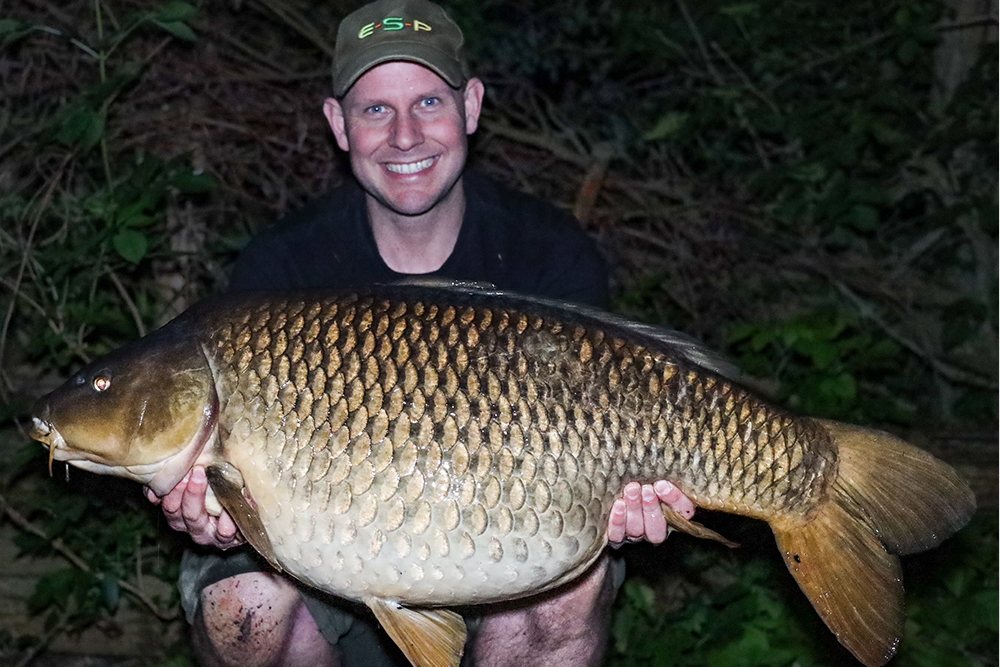 One of a few from a prolific few hours.

I had an upper twenty in the night and a lovely low thirty in the morning and Bart had a similar morning landing a few fish including a 43lber. We decided to stay put for the second night anticipating a repeat of the night before but it was very quiet. By 7am I felt like it just wasn’t going to happen and after seeing numbers of fish in another part of the lake, I decided to wind in and move swims for a couple of hours, casting a solid bag to showing fish. Frustratingly they were showing and fizzing and my bag was on the money but no bites materialised. Bart remained biteless too so we made the decision to move to the top end for our last night, there was no one on the back bank and we fancied a bbq and a social catch up. I was on the barrow and heading round when Bart’s rod signalled a take out the blue, crazily it turned out to be a 44lber and his other rod was away shortly after with another carp. He didn’t bother casting back out after those two fish and packed up and moved to the top end with me, the lure of the BBQ and a beer was enough of a pull. Willingness to move when it isn't happening is important!

I got the rods out by 1pm, there were a few fish about and they were clearly feeding with bubbles pinpricking on the surface regularly. It came as no surprise when my left handed was away with another upper twenty.

The rest of the afternoon was quiet as we got out traps set for the evening and devoured an epic BBQ, slid down nicely with a couple of cold ones. The night was quiet, but first thing in the morning my right hander was away. As I hit into the rod I could hear Bart playing a fish next door. Mine was a stunning common and I thought it might go 40+. It was tipping it down with rain and I left my fish in the net for a few minutes whilst I quickly photographed a mid thirty mirror for Bart.

We got my fish into the mat and weighed it and the scales settled on 38Lb 12oz. We were just about to do the photos and Bart’s rod was away so I popped my upper thirty into the sling and held her in the edge for a few moments. Barts bite turned out to be a tench and he was soon back in my swim to do the photos. I waded out and picked the sling up only for my heart to sink as the zip was undone and the fish had done a Houdini disappearing act and was gone! On closer inspection I had got something caught in the teeth of the zip and the fish had got it’s nose in and split the zip open and escaped. I was absolutely gutted. I only had two hours left before I had to be packed up for work and I felt it was going to be a bad day. I decided on putting 3 more Spomb’s of bait out hoping for a quick bite and an hour later my prayers were answered. A clutch grinding take was followed by a dogged battle and I soon slipped the net under an incredible fish, one that more than made up for the Houdini moment an hour or so before.

We hoisted her up onto the scales and bart took a reading of 40Lb 6oz. We did some water shots and then I packed up skipping down the path in delight heading to work with a smile beaming from ear to ear.

The 'escaped' fish was all forgotten about after this one!