ESP was launched in early 1999 and the initials literally stand for Extra Sensory Perception – or 'sixth sense'.

Prior to the brand launch, various names were being kicked around and the ESP name was inspired by an off-the-cuff remark made about Terry Hearn, the brand's longtime consultant.

It was suggested that he caught so many big, difficult to catch carp that he must have some sort of sixth sense or extra sensory perception - so the name stuck and ESP was born!

Innovations from the off!

Initially, the brand specialised in terminal tackle but has since branched out into top quality made to specification rods, clothing and luggage. Amongst the first range of terminal tackle were two hook patterns, the T-6 and the G-4, which took the carp world by storm. They were the first carp hooks to feature ultra-fine needle points which were so much sharper than anything previously available. These were designed in conjunction with Terry Hearn who recognised that an ultra-sharp hook was the most important component when it came to targeting some of the most highly pressured and rig shy big carp in the country.

The legendary Stiff Rigger hook pattern quickly followed, specifically designed to be fished on Terry's hinged stiff rig, which evolved into the chod rig, presentations that are still just as deadly today. In 2001 the Big-T hook pattern was launched, this was the first mainstream carp hook to feature a super slick PTFE coating and set a standard which the rest of the industry followed.

The introduction of the Cryogen hook range in 2016 set a new standard in carp hooks. Their unique twin tempering process resulted in hooks with unrivalled strength and point durability, up to 25% stronger than previous ESP hooks, without increasing wire gauge. 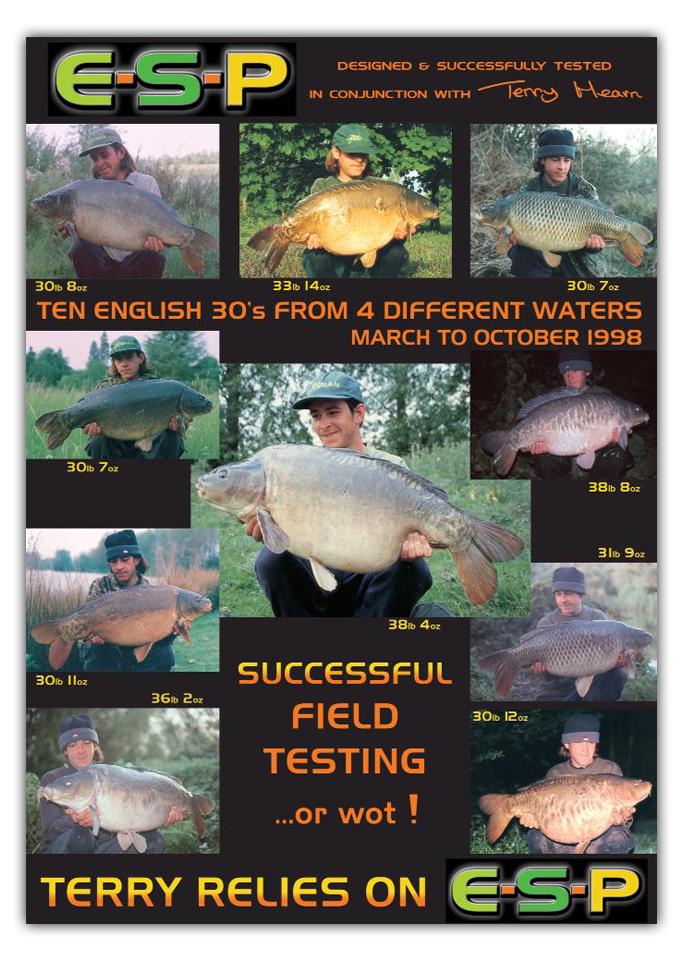 Every product in the ESP range is made to specification, nothing is brought 'off the shelf'. In-house, CAD engineers work alongside our angling experts in designing and perfecting new products.

We have our own plastics factory where all our moulded components are made to strict standards using a wide variety of different polymers. All our mould tools are made in the UK to ensure the best possible quality. The same goes for our wide range of ready tied rigs and leaders - they are all tied in our own factory by highly trained staff to ensure consistent, excellent quality.

We have also invested heavily in CNC lathes, installed at our UK base and used to make a variety of products including the ESP Barrel bobbins.

All new products are thoroughly field tested and adjusted where necessary to ensure the final product is as perfect as possible. Over the years this has helped make the ESP product range one of the most widely used and respected in the tackle industry.