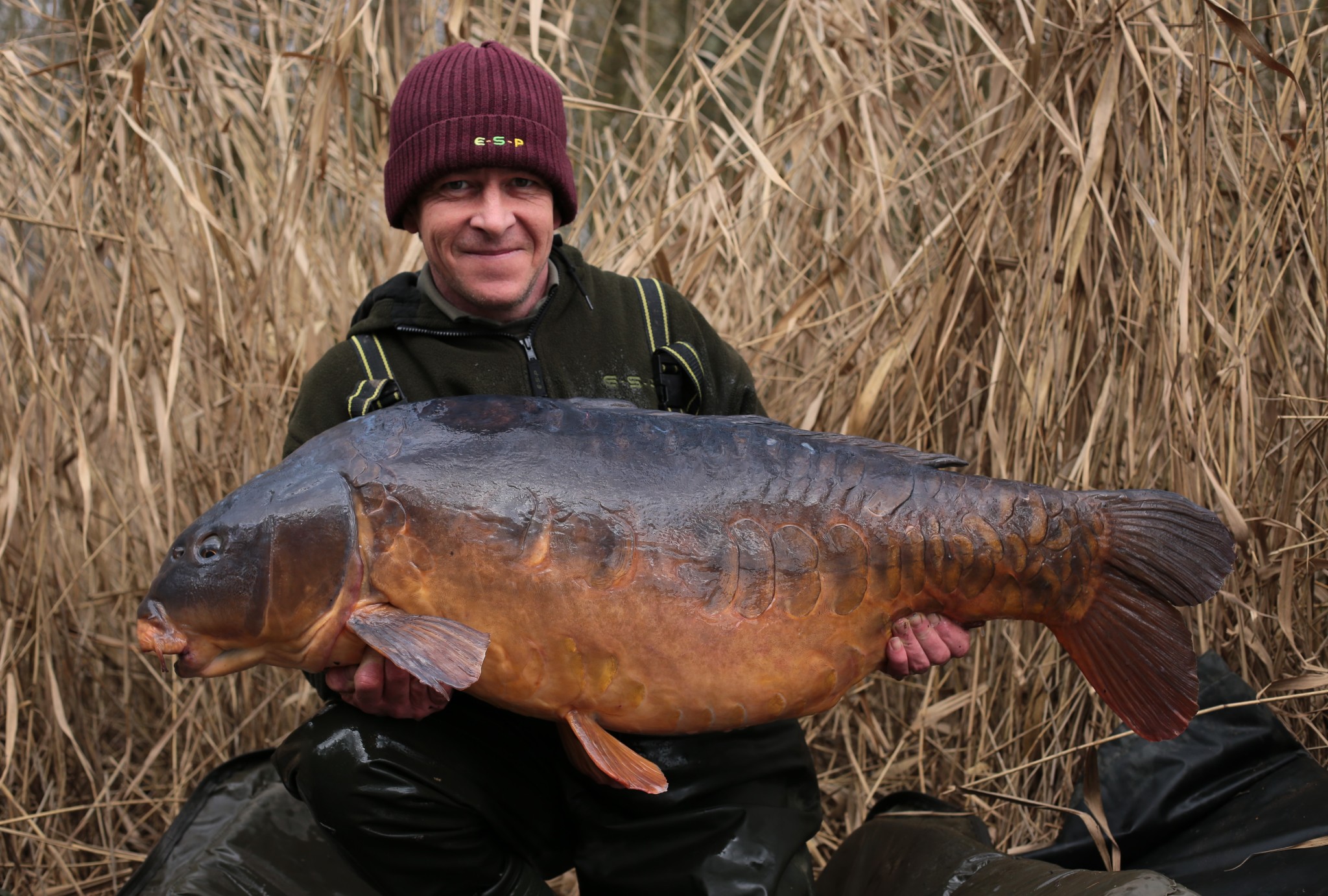 The carp fishing grapevine has been abuzz with news of Terry Hearn’s capture of the Parrot from the Berkshire syndicate. Here is the exclusive story from Tel!

‘Well, well, old Storm Doris done the trick! I love carping whatever the time of year, but big winds and mild, rainy weather in the winter has always been a bit of a favourite for the big’uns. The windier the better, when the airs full of energy, the trees are creaking and cracking, and you can barely hear yourself think…I love it!

It’s funny how things go, but the old Parrot was one fish I was starting to think I’d never catch. Since starting on the water back in September ’15, up until last November, I’d been lucky enough to catch pretty much everything else in the lake, with the exception of one other good mirror known as Veiny Belly. 176 carp in all…that’s a lot of rig tying let me tell you! I’d done my time twice over, but still the number one prize was missing.

My first trip back after a long winter break was only last week, but the water temperature was still cold at 40f, and with otter fencing work being done around the lake, diggers and JCB’s driving round and chainsaws buzzing away all day, I only fished a night before sneaking off onto one of the quieter lakes on site. In fact that’s where I started my trip this week, but as soon as the work was finished I headed straight back over to Cranwells for a walkabout. It was lovely and mild with a strengthening wind, and once I got round to the more sheltered side of the lake it didn’t take long to see the signs. Three fish topped over the course of just a few minutes, possibly the same one each time, but at this time of the year it was all I needed to see.

An hour later I was all moved and set up in the Lifebuoy swim, an area of the lake that I’d fished a lot in the past. As I set up I already had a fair idea where I’d be putting my baits. Stretching out for over a hundred yards straight in front was shallows, just 3-4ft deep, and then tighter to the island the depth drops away to 9ft.

The deeper gulley always looked good for action, but I’d fallen into that trap plenty of times before and rarely caught from it. No, not this time, instead all three rods were going shallow, nothing in more than 5ft. Temperatures that night were forecast to stay above double figures, ideal for the shallower ground, which my thermometer told me had already risen to 46f, a huge increase from just 40f the week before.

I waited until gone 4pm before boating the rods out, all at range, one to the left, one to the right, and the banker rod straight out in front, in a slight depression where the depth increased from 4 to 4.5ft. Two shaved tigers on the hairs, a couple of handfuls of hemp, a few chewed nuts and a sprinkling of ‘super maize’ and corn around each. Try putting that out with a spod at 120yards when it’s blowing a hooligan!

I heard fish topping closer in to my right in the night over only 2-3ft of water, typical here as they often creep onto the shallowest ground under the cover of darkness in mild conditions, even in winter, but come dawn it was odds on they’d push further out again, so I resisted the temptation to move one of the baits. Good job!

I awoke at first light with no action, and with Storm Doris at its peak and my sleeping bag feeing even more snug than usual, I shut my eyes again and dozed back off. Just before 8am I woke to a single bleep, and focusing on the tips I saw that the middle one was starting to bend round. A few more bleeps as I was putting my boots on, and by the time I got down to the rod, line was slowly ticking from the right clutch.

The first few minutes were nothing out of the ordinary, a big heavy weight at range, typical of a usual Wasing battle. It wasn’t until I got it halfway back that I started to get that ‘hmmm, this is a possible’ feeling. A little closer and suddenly it’s tail started slapping the surface over shallower ground. Shallower, but still around three feet deep, yet it’s head was on the bottom and its tail was on the surface…it had to be it, I knew it, but I was still trying hard not to think it. A few more turns of the reel handle and it was probably only fifteen yards away when it’s wide crusty back broke the surface. I was just about to slip into my chesties at that moment, but seeing that back turned my knees to jelly. It was him, for certain…sod the waders, instead I just walked straight in up to my waist. It picked up a small amount of weed when it hit the slightly deeper gully in my margin, making it a tad easier to guide over the cord, but as I went to lift it woke up again and rolled back over the cord. Now I was in bits, I knew 100% what I had on and it was thrashing about on the surface, shaking it’s head from side to side. Proper heart in the mouth stuff, but the next time it settled down I took another step or two out into the lake, pushed the net deep down beneath it and lifted…YES, YES, he was mine! 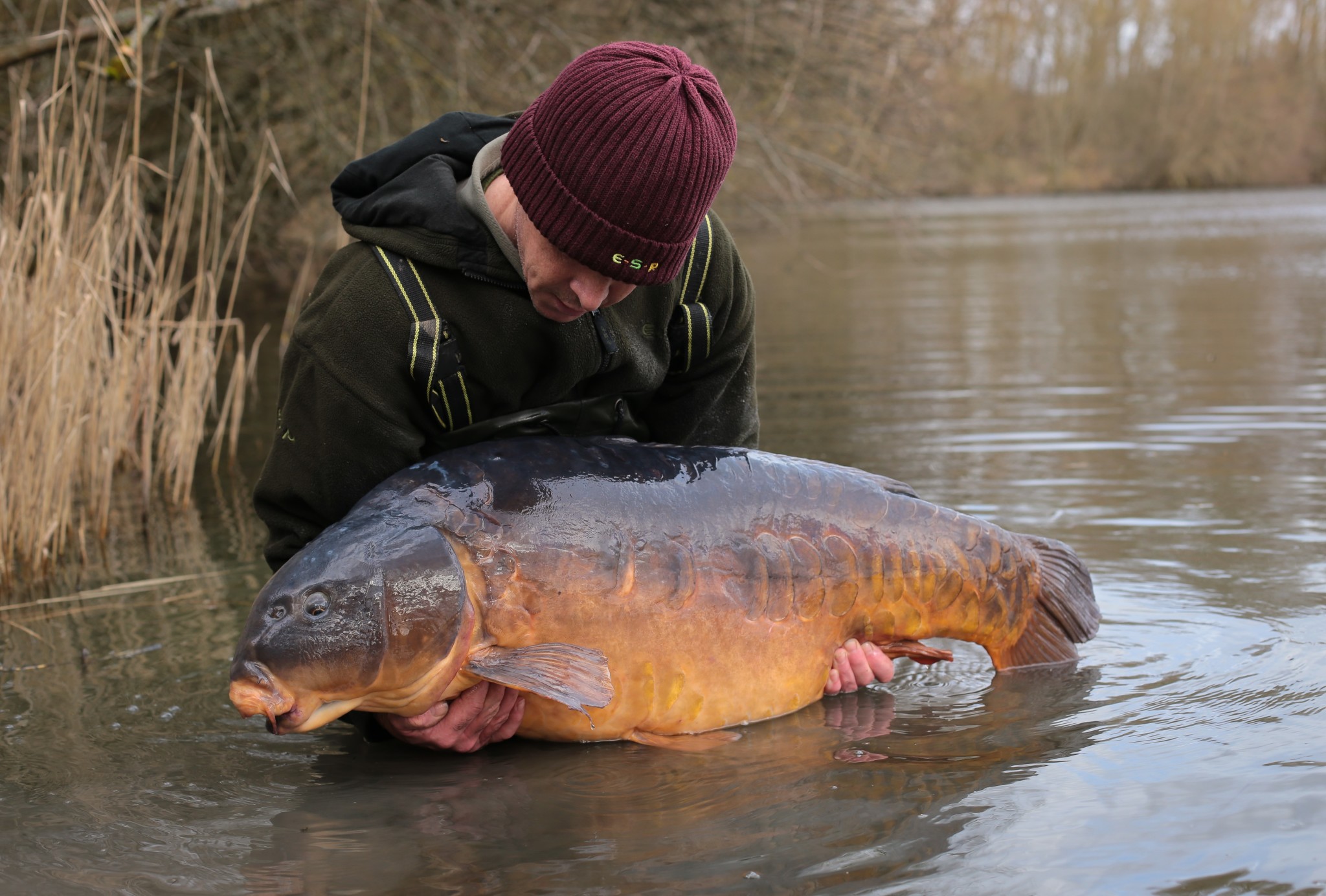 63lb’s of long, dark, scaley mirror. One thing for sure, the longer the campaign, the longer you have to wait, the bigger the buzz at the end of it. Still on cloud nine now’.