Home > Off the Mark at Savay!

Mark McKenna has kindly sent us pictures of the impressive carp he’s caught so far this season from the legendary Savay Lake. Mark is a member of the night syndicate which is split into two rota’s (The Loony’s and The Toads) and operates on a week-on / week-off basis from June – November. When Mark is ‘on rota’ he fishes every night from Sunday to Sunday and packs up in the morning to go to work during the week.

Still, as you can see from the pictures having bags under one’s eyes the next morning at work is well worth the effort as these carp are really just a bit special. After two blank rota’s Mark’s first fish of the season was an old mirror known as the Trophy fish at exactly 40lb (not a bad first fish of the season!) and this was followed on the next Rota (two weeks later) by a couple of 20’s topped by this stunning, dark 28lb 8oz mirror. 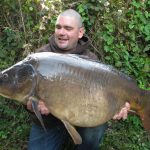 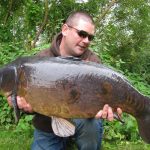 The best was yet to come though with last week being a real ‘red letter rota’; in Mark’s words: ‘The Sunday morning patrol in search of Savay carp lead me to the canal bank, I got off to a relatively fast start with a 37lb near leather followed by a 34lb 8oz mirror, an old fish which featured in Rob Maylin’s book Tiger Bay, published way back in 1988! Then followed a new p.b. 36lb common and then finally the mighty Black Mirror at 47lb 8oz on Saturday morning’. 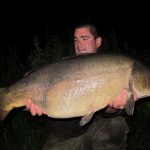 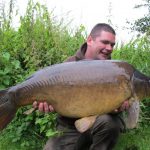 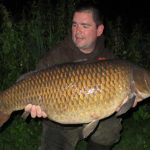 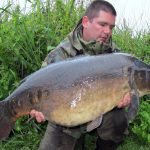 The captures coincided with a full moon phase which seems to consistently throw up a few of the elusive bigguns. Tackle used included the brilliant new ESP Syncro XT mono in 18lb (you don’t want to be taking any risks on a place like Savay) and the end tackle consisted of 25lb Two-Tone coated braid hook links with either size 6 Curve-Shanx or size 3 D-7 Raptor hooks, whilst the bait was a new prototype from Mark’s Baitcraft stable – looks like its working just fine!

Mark has offered to keep us regularly updated on his exploits at Savay, so fingers crossed for a few more jewels from one of the true Mecca’s of carp fishing! Keep checking back here for more news or join us on facebook where you will receive regular updates on catch reports, new products and competitions.